Theory to practice
The first two blogs in this “Why Row?” series talked about the energy systems we use in rowing, why rowing is such a big energy and calorie burner, the strength and conditioning benefits of rowing and how we train these systems in different types of Crew Class sessions. This next blog is a little different. It’s easy to talk about the theoretical benefits of rowing, it’s more difficult to show that in practice. So in this blog I’m going to talk you through an example of this in practice – actually, this example is me – let’s call it the Tooler Case Study.

In October 2020 I took a MAD notion to take on the World Indoor Rowing Championships; scheduled to be a virtual event in February 2021. At this point, I was training about 3 times per week. Actually, I’m not sure I would even call it training – it felt like more of a box ticking exercise than anything – I was very far off the level of effort I was used to when competing as an athlete. The idea of actually training for something on the world stage was exciting, but also scary! I hadn’t really competed since the 2004 Olympics. Competing at the “Worlds” was more than just the race itself, it would mark my card… give me a world ranking… after 15+ years away from that competitive environment.

Lightweight
As if that wasn’t bad enough – I decided to compete at lightweight (75kg). Despite competing for most of my career at lightweight, it was not something that came easily to me. I’m almost 6ft, which is probably on the taller side for a lightweight athlete. Pre-competition weight cuts were something I was used to from my competition days, but not from an 85kg starting point! So, I wasn’t in great shape – I had 10kg to lose and had to dial back into the training efforts, volumes and mentality I thought I had left behind.

Training
The challenge was clear – I needed to lose fat and at least hold on to muscle, if not gain it. Having done no resistance (weights) training in years, I was worried about my strength and also the potential that I would lose muscle when trying to cut weight. While weight loss was the key priority, I needed strength to compete for a good 2k time. With a very tight time frame, a full “pre-season” training phase with dedicated weights sessions wasn’t possible; so the plan was to use just the row erg for all of my training. This meant a combination of longer endurance sessions aimed at burning energy and increasing aerobic fitness, supplemented with some power sessions to focus on strength. Given the concerns around losing fat and maintaining muscle, I decided to tag in body composition measurements (using the BodPod) to monitor changes in fat and muscle over time. As you will see in the figure below, I managed to lose 7kg of fat and gained 3kg of muscle in the first 12 weeks of training. If you look closely you’ll see the first 6 weeks were less productive (just 2% fat loss) – Guinness and Mars bars were still anchoring my diet 🙂 – so most of the progress was made in the last 6 weeks!

Varied training on the rowing erg
Some might say this combination of fat loss and muscle gain is impossible without dedicated weights sessions – I was somewhat surprised myself. But, the data doesn’t lie – this shows the potential range of benefits from varied training sessions on the erg alone. So, like what I tried to describe in the previous two blogs in this “Why Row” series; when programmed correctly, row erg sessions can deliver lots of different training benefits. Although what I have described here is a very specific example of cutting weight for competition, the same principles apply to anybody looking to change body composition and improve fitness. 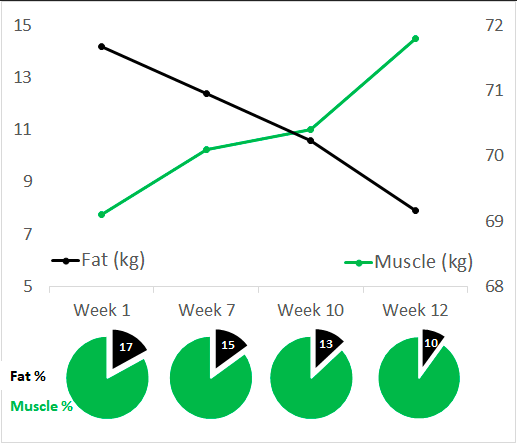 Figure: BodPod measurements of fat (kg) on the left and muscle (kg) on the right. The black line shows the 7kg drop in fat weight over 12 weeks and the green line shows the 3kg increase in muscle weight. Testing conditions were controlled before each measurement to reduce factors that impact variation in measurements. The pie charts on the bottom show the change in body fat %, dropping from 17% to 10% (actually 9.9% – but who’s counting).